The day I hacked Apple

The year was 1998 and for the first time in my life I felt that I was best in the world at something; programming the script language Lasso. We were a small, but dedicated community back then, maybe due to the fact that the platform was on Macintosh. I was quite an Apple fan back then and still is. I was an administrator for some DNSservers, a dozen of web servers, mail servers, database servers, hey I even had a IRC bot on undernet, all running on Mac computers.

Back then, the security was not a highly prioritized and the know-how was very low. People and companies were just happy to code and publish dynamic data on their home pages and not everyone knew that the risk of being hacked was there. As one of the good guys it was my hobby to scan the web for solutions based on Lasso and see if their security was good enough. If it wasn’t, it was my duty to inform and not to destroy (except one time with this incident, which was a stupid act from my side). And always free of charge, I did it to learn and to help, never to get an economic gain. 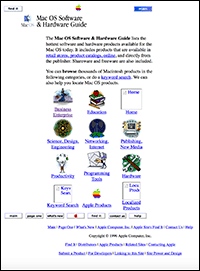 My Apple hack started one day when I stumbled upon a site on Apple’s domain. It was a site where Apple published a searchable database for Macintosh based software and hardware. It took my about 15 minutes to understand their framework and within a half hour I had full control of all their data. As always I did my duty and mailed their webmaster and notified them about the security flaw. But the response never came, nothing uncommon back then, because most of those email were sent to a Webmaster email account, that never was checked. My email was probably in that mailbox forever, never to been read. The site was vulnerable as long as it existed, opened for an attack.

I stopped looking for security flaws around 10 years ago. You can call it lack of interest and of course lack of knowledge. I stopped coding around 2003 and have never picked up my old hobby since then. But I hope that there are still people out there doing the same thing I did back then, helping out…

PS. Sorry for the hack Apple <3 I still love you DS.

Member of the board, owner or both?

This website uses cookies to improve your experience while you navigate through the website. Out of these, the cookies that are categorized as necessary are stored on your browser as they are essential for the working of basic functionalities of the website. We also use third-party cookies that help us analyze and understand how you use this website. These cookies will be stored in your browser only with your consent. You also have the option to opt-out of these cookies. But opting out of some of these cookies may affect your browsing experience.
Nödvändigt Alltid aktiverad

Any cookies that may not be particularly necessary for the website to function and is used specifically to collect user personal data via analytics, ads, other embedded contents are termed as non-necessary cookies. It is mandatory to procure user consent prior to running these cookies on your website.